I’ve been debating whether he was worth my time, my words, and even my critical thinking capabilities. I have yet to conclude whether he truly is, but either way let’s talk about Milo Yiannopoulos.
Unless you live under a rock, you may have heard (especially as of late) about the incorrigible Milo Yiannopoulos. A walking contradiction and the former Technology Editor for the (absolutely disgusting, Alt-Right-leaning, horrendous, actual fake-news factory) Breitbart News.
I first heard about Milo when he was banned from twitter in July of 2016. The reasons for his ban are disgusting, and not something I want to repeat, so Google that yourself if you find yourself so inclined. I continued to hear about Milo throughout the course of our 2016 Campaign Season and afterwards, when we found ourselves with a President who may or may not support what the Alt-Right Movement stands for. Alright, I get it, I am getting a little bit political, but I want to stress here that I am VERY MUCH AWARE Milo does not stand for or believe what most Republicans do. I get that. But then why in the hell was he invited to speak at CPAC (Conservative Political Action Conference) this week in DC? And why did it take comments about Pedophilia for our country to finally realize this man is a monster?
As a very avid watcher of Real Time with Bill Maher (yes, it is not perfect, but I think that the majority of the time, he is right on the money), when he had Milo as his guest last week, I wasn’t sure how to react. Ultimately, the interview did a really bad job at showcasing just how much of an Alt-Right, contradictory, hypocrite Milo truly is. It was chummy at best. They talked about the few things they agree on (free-speech and the liberal’s reaction to Milo helping catapult him into more fame), both being banned from Berkley (although Milo’s resulted in thousands of dollars in damages, riots, and a fat speaking fee paycheck he collected despite never speaking), and how Bill Maher is the only good liberal left. 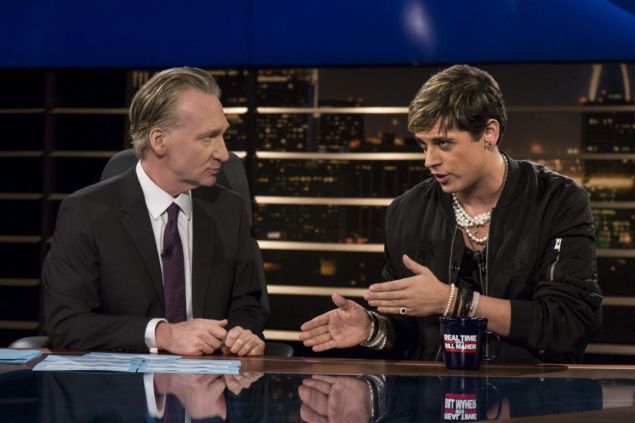 I actually came away from it with a sense of respect for Milo? I felt weird and dirty afterwards, how could I find someone so vile somewhat entertaining? While I do understand the need for us to all get along, and more importantly in these times to have a willingness to listen to the other side, I don’t feel the interview/panel afterwards was an accurate representation of just how much horrid shit Milo supports. You can support Free Speech and not be an asshole. You can be a libertarian and not promote fake news and only your Alt-Right agenda. Asking for a friend…but I am ready for the blatant and openly accepted hypocrisy to go away; anybody else?
Like saying feminism is a cancer, personally insulting people on Twitter and believing his words don’t hurt feelings, or that it’s just a funny joke. Despite being an openly Gay man, he thinks that gay rights are detrimental to humanity. Or most recently commenting on how at 13, a young man has the ability to consent to sex.
If we are going to get anywhere as a country, or even begin to have an open dialogue, we have got to (100% looking at you republicans) denounce this kind of “celebrity.” The Alt-Right movement, and the one that Milo so proudly stands for, is not the Republican Parties platform, and if it is, we have a lot of other problems to address. I commend CPAC for finally getting rid of this man as their speaker, and getting rid of his platform. I commend Simon and Schuster for canceling his book deal. Now, I would love to see our President do the same thing, as he found the time to threaten Berkley when there were riots over Milo’s speaking engagement but not the time to condemn pedophilia?

But alas, who would I be except a fool to expect anything but hypocrisy? I wish I could say other wise, but those are words for another day. Let’s all agree we should look at things from a bi-partisan view, no?
Milo Yiannopoulos Breitbart News Fake News Alt-Right DC
Previous ArticleIs Dangling 73-Stories In The Air With No Safety Gear Sexy To You?
Next ArticleNew Artist Alert: Wake Up With Some Edgy Rock-Blues Infusion

The Donald Hangs Fake TIME Covers In His Golf Clubs

Ever wonder what watching the Super Bowl with a Pats fan is like? I'll answer for you, you probably don't. We documented it and it...